Read the original story as it appeared on NPR here.

With the recent wave of sexual misconduct allegations sweeping the nation, we went Behind the Headlines to discuss the sexual harassment and assault on Friday’s St. Louis on the Air.

Green gained attention earlier this week after she publically came forward on Facebook detailing her experiences with sexual assault. The post garnered hundreds of reactions.

She advocates for more partnering between elected officials and grassroots organizations to help pass legislation protecting sexual assault victims as well as to prevent further cases of harassment.

Durrett founded Combat Sexual Harassment to create a network to help women and men who have faced sexual misconduct and provide them with resources, including access to lawyers and domestic violence programs.

Listen below for the full discussion: 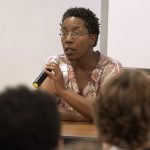