Do we need a 28th amendment to limit campaign funds from corporations and billionaires?

Original article can be found on STL Public Radio 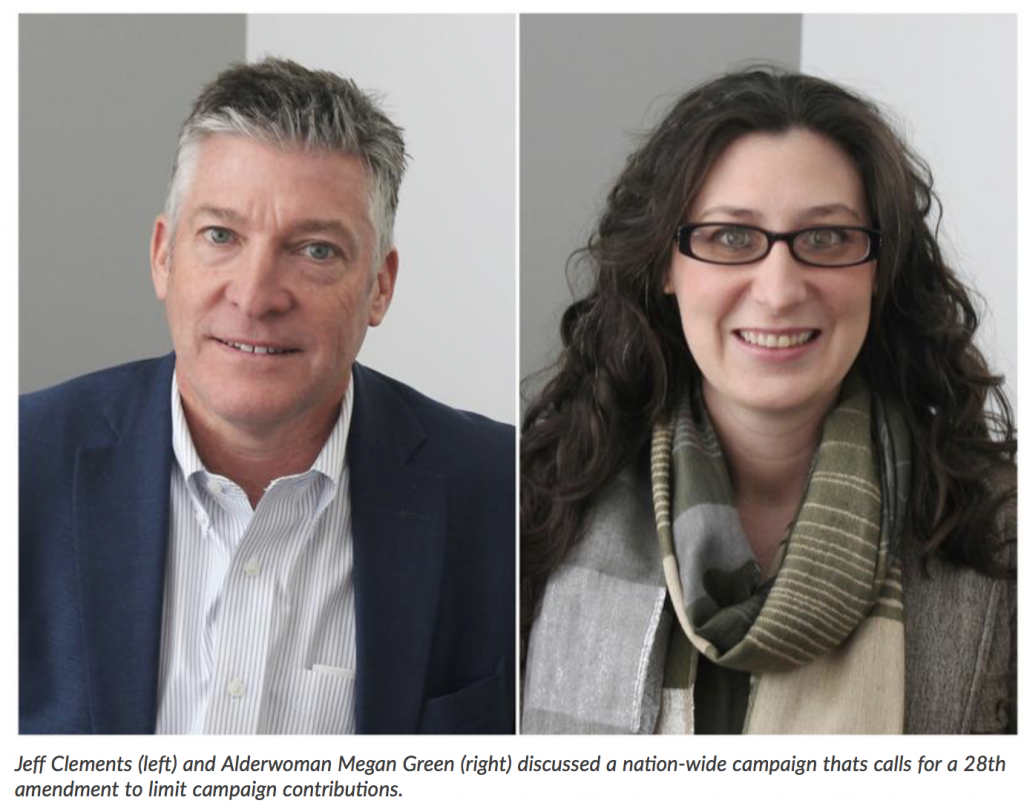 A series of U.S. Supreme Court decisions including Citizens United v. Federal Election Commission struck down long-standing campaign finance laws. The rulings determined that the use of unlimited money to influence the outcome of an election by individuals, corporations, unions and other entities is free speech protected by the First Amendment.

The organizations American Promise and American Constitution Society have launched a national town hall tour to garner support for election financing reform which could result in a proposal for a 28th amendment to the U.S. Constitution.

On Tuesday’s St. Louis on the Air, host Don Marsh talked to Jeff Clements, president of American Promise and author of “Corporations Are Not People: Reclaiming Democracy from Big Money & Global Corporations,” and Megan Green, alderwoman of St. Louis’ 15th Ward and co-sponsor of Resolution 240, a call to the U.S. Congress to propose a Constitutional Convention to “restore Constitutional Rights and Fair Elections to The People.”

Clements explained the role of Citizens United and said the decision has led to billions of dollars spent on elections since 2010, mostly coming from wealthy individual contributors and corporations.

“It’s about billionaires, it’s about unions, it’s about corporations – anywhere where you get aggregations of wealth – that’s where the corruption danger and the danger to ordinary American citizens being able to participate comes from,” Clements said.

Green talked about the implications of corporate influencers and said that money spent on lobbying led to “$4.4 trillion in return from the government,” such as tax breaks and subsidies.

“That is just an astronomical amount of return that is happening to un-level the playing field,” Green said. “To help some of those that are the most well-off … which is often to the detriment to those who have the least.”

Both Clements and Green advocated for an amendment that would entail significantly limiting campaign contributions, specifically from corporations, since “corporations and unions are economic entities – not political actors,” they argued.

Green said the increase in corporate and special interest money in campaigns “dilutes democracy” and further disadvantages grassroots candidates from competing with other politicians. She also focused on the local campaign finance structure and explained the fund limits set for local politicians.

“You can actually give more to a local elected official right now in our state than you can to somebody running for state wide office,” Green said.

Clements noted that the 28th amendment would potentially be the first amendment created in the digital age and that the “Writing the 28th Amendment” tour will allow people to contribute ideas to reform efforts.

“No amendment has ever been easy. The American experiment isn’t easy; every time we’ve ever made progress as a country, it’s been because Americans step up and do hard work – and this will be no different,” he said.