Read the full article from the St. Louis American here. 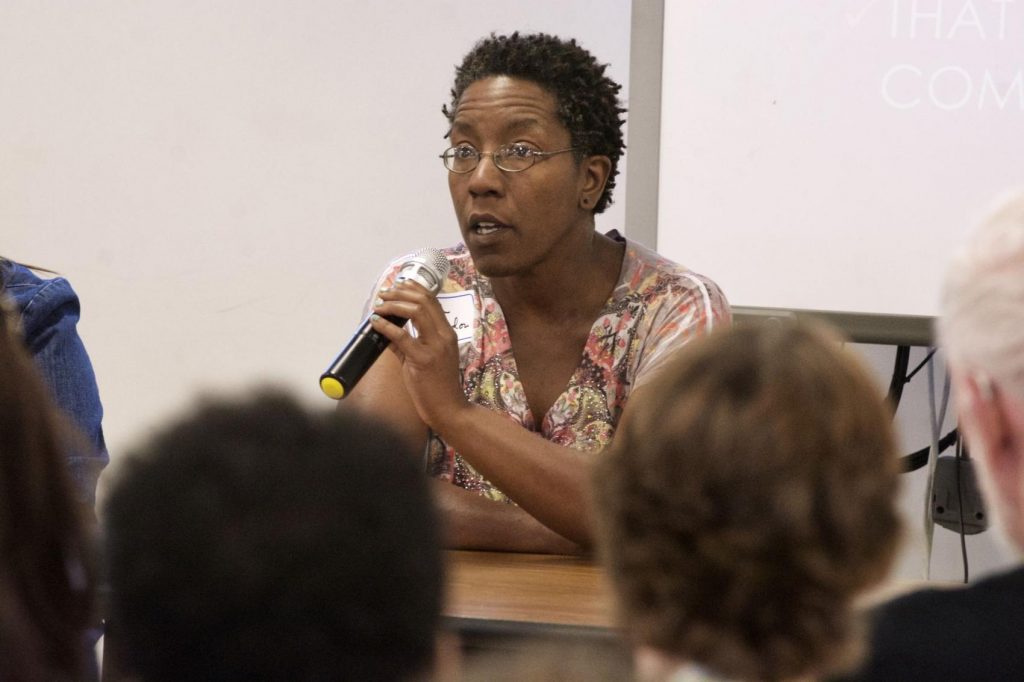 Longtime St. Louis Place resident Sheila Rendon realized in 2007 that developer Paul McKee Jr. was beginning to buy up all the land in her North St. Louis neighborhood, including buying out some of her neighbors. She didn’t know it was McKee because it was done under the name of more than a dozen “shadow companies,” she said.

She later learned about McKee’s “vision” – and she clarifies that it wasn’t a plan – to redevelop North St. Louis. That’s when she and her neighbors established a group called the Northside Community Benefits Alliance.

In 2009, the group had a meeting with then-mayor Francis G. Slay, his chief of staff Jeff Rainford, then-Alderwoman April Ford Griffin, who represented parts of the North Side, and the city attorney. When the residents expressed their concerns about eminent domain and being pushed out of their homes, the city leaders told them it wasn’t going to happen.

“They told us, ‘You have every right to stay,’” said Rendon, a 45-year-old mother of two and former city police officer who patrolled her childhood North Side neighborhood. “They said the neighborhood wasn’t going to be gentrified, and we weren’t going to be taxed out.”

The residents said they wanted a Community Benefits Agreement (CBA) – a legally binding provision within the development agreement with the city to back up all those promises. The CBA would have required McKee to dedicate a certain amount of the residential development to affordable housing and other benefits to the community.

This past year, Rendon and her entire neighborhood were removed from their homes through eminent domain to make room for the new $1.75 billion facility for the National Geospatial-Intelligence Agency, which is receiving a generous public subsidy package. When the city offered her family a price for their home – arguing that it was a “fair market price,” she said – Rendon took the city to court and got more money.

On June 1, Rendon told the standing-room-only audience at a public forum called “What are Community Benefit Agreements?” that North Side residents have learned their lesson.

“We have listened to promises made by several mayors, several alderpersons and they have not come,” said Rendon at the forum held at LaSalle School at 1106 N. Jefferson Ave. “It’s time for us to have a voice. Never believe anything that comes in the form of a handshake – always have it in writing.”

For too long, city leaders have felt that the community has no right to be part of the negotiations on development projects occurring in their neighborhoods – using their money, Rendon said. The 100-plus forum attendees seemed just as anxious as Rendon to change that. Rendon was among the panelists who spoke about CBAs at the June 1 event, which was organized by the St. Louis Equal Housing and Community Reinvestment Alliance (SLEHCRA), Team TIF and Forward Through Ferguson.

St. Louis is currently poised to become among the few cities that have ordinances for CBAs – meaning that developers want to use public money to subsidize their projects need to incorporate CBAs into their agreements with the city or they don’t get taxpayers’ dollars. On May 5, President of the Board of Aldermen Lewis Reed introduced a board bill to establish a citywide policy on CBAs. Alderwoman Megan Ellyia Green of the 15th Ward is also working on a bill that would do the same thing, and she plans to introduce it Friday.

Keynote speaker Rashida Tlaib, of the Sugar Law Center of Economic and Social Justice in Detroit, spoke about Detroit’s journey to establish the nation’s first CBA ordinance – particularly from the residents’ and grassroots perspective. Tlaib said that having the forum now in St. Louis was “critical.”

“I’ve seen it happen in Detroit,” said Tlaib, who was also a former state representative in Michigan. “You’re going to get pushed out, and you can’t seem to stop it.”

She offered tips that the Detroit community coalition learned about organizing, educating public officials on the topic and building allies. And if all else fails, she said, “civil disobedience is an option.”

“Don’t let them paint you as anti-development,” Tlaib said. “We aren’t against development, but the corporate welfare line is getting too long. Don’t think that you’re asking too much.”

She also compared the bills of Green and Reed using her three benchmarks for a solid CBA – that the agreements have community representation during negotiating, are legally binding and are enforceable by the community.

Most notably, she looked at whether or not the bills required a “community engagement notice.” Basically, Green’s did and Reed’s didn’t.

“My boss has been working on CBAs for about eight years – not to dis your council president [Reed], but we’ve never seen anything like this,” she said.

Not only did Reed’s bill not require a meeting to gather community input, but the agreement would also be negotiated between just the alderman who represents the ward where the project would occur and the developer. There is no mention of community representation.

Enforceability is the most important aspect of a CBA, she said. In Reed’s bill, enforcement falls in the hands of the alderman; in Green’s bill, it would be the community with that power. Both bills are likely to change, she said, and the most important thing for the community to do is ignore the politics and focus on getting the three “bedrock principles” included in the ordinance.

“That’s what changes this culture, where it’s all up to them to enforce it and there is so much transparency when we get to be in the room,” Tlaib said.

She pointed to successful CBAs, including the one between Twitter and San Francisco. The agreement required Twitter to purchase $500,000 in goods and services per year from small businesses, donate $3 million annually to local nonprofits, put in volunteer hours from Twitter employees, and offer a certain amount of free advertisement for community nonprofits on Twitter, among other things. In Pittsburgh, a deal to build the Penguins Hockey Arena resulted in the creation of a community center, grocery store, employment center and money for neighborhood programs.

She said that St. Louis needs to first “visualize” what they want and then stand strong on that.

“You all deserve so much more, especially because it’s our money,” Tlaib said. “Believe it, understand it. Pay attention, and it’s okay to ask for more.”