Read the full article as it appeared in the St. Louis Post Dispatch here.

ST. LOUIS  •  The grand tradition of lobbying on the Aldermanic floor at City Hall could come to an end.

Aldermen will soon consider whether lobbyists should be banned from the floor while meetings are in progress.

Right now, lobbyists are free to sit on the aldermanic chamber’s floor as aldermen debate legislation. Alderman Megan Green introduced a bill on Friday that would kick them out.

The bill defines a lobbyist as anyone “who acts for the purpose of attempting to influence the taking, passage, amendment, delay, or defeat of any official action on any bill, resolution, amendment, nomination, appointment, report or any other action or any other matter pending or proposed in an aldermanic committee, or in any matter which may be the subject of action by the Board of Aldermen.”

Dozens of representatives and lawyers for business groups, unions, and other organizations seeking to influence legislation routinely attend the board’s weekly Friday meeting.

The bill will now head to a committee for debate. 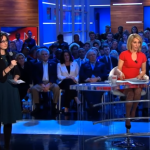